Bubble tea has become an incredibly popular drink around the world however there are still some people who are skeptical on how safe boba actually is.  There have been news reports about certain manufacturers using toxic chemicals and another story of undigested balls inside of a 14 year olds girls stomach!  So what is the truth about bubble tea?  Is it safe to drink?

Right now bubble tea ingredients that are made in Taiwan are the safest they have ever been.  That is because they suffered a food scandal in 2012 and have since developed strict testing and food safety guidlelines.  The story of undigested boba balls stuck in a girls stomach is from Zhejaing Province in Western China and is a great reason to make sure that your bubble tea supplies all come from Taiawn, not China! 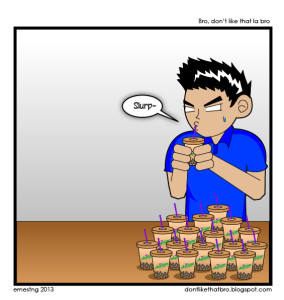 Boba Stuck in a Girls Stomach

In 2019 there was a news story of a young girl in China who went to the hospital after experiencing acute abdominal pain and constipation for 5 days.  The doctor did an X-ray of her intestines and found hundres of undigested tapioca pearls inside her stomach!

There are two important lessons to learn from this story:

The first is to chew your boba!  Tapioca pearls are made out of starch so make sure they are cooked thoroughly and that you chew them before swallowing.

The second is that you should only buy your bubble tea ingredients direct from Taiwan or from a supplier who gets their ingredients from Taiwan.  Taiwan has a much better food safety record than China and has strict SGS guidelines for all food service providers.

In May 2012 Taiwan’s food and beverage industry was hit by a devastating food scandal.  Some drink producers were trying to save a few bucks by adding a carcinogenic chemical known as “plasticizer” or DEHP.  This chemical is traditionally used to make plastic but some shady drink manufacturers realized that it could be used as a drink stabilizer and started putting it into many bottled drinks and syrups.  Some of these drinks and syrups were exported to the US and Europe and were promptly banned when word of the scandal got out.  Now the Taiwanese FDA has new stringent guidelines and testing procedures making it harder for illicit manufacturers to get away with such practices.  “Taiwan’s Food and Drug Administration confirmed in September that in a second round of tests conducted by German authorities, Taiwanese bubble tea was found to be free of cancer-causing chemicals.”

Skip ahead only two years and the bubble tea community is rocked again by “Boba-Gate”.  This time, maelic acid was the culprit and it was directly affecting the delicious pearls that make bubble tea.  Again, an unscrupulous manufacturer tried to cut corners and save a few dollars by mixing this with boba.

“Maleic acid is a dicarboxylic acid. It is mainly used as a detergent in surface cleaning! It’s applications include being used as sizing agents for the textile industry, photographical chemicals for quick-photo processing, making maleate salts in the pharmaceutical industry, dying auxiliary, and as an oil and fat preservative. It is also used for manufacturing polyester resins, pesticides, tartaric acid, and succinic acid!”

This industrial cleaner should obviously not be anywhere near food and it is absolutely despicable that anyone would ever try to profit by slowly poisoning massive groups of people.  Unfortunately this is a problem no matter where you are in the world.  From unsafe lead levels in toys from China, GMOs, bleached McDonalds hamburger meat all the way to whatever they put in hot dogs. Your food, clothes, toys etc are only as safe as the agencies that regulate them are.  So if you’re worried about what’s in your boba make sure that you ask to see some proof of testing.  Here is an example of a major chain providing a certificate of testing by the SGS in Taiwan.

Fortunately, once the dust has settled and all the ingredients have been rigorously tested, Boba is probably the safest that it’s ever been.  Big chains are unwilling to take the risk of another controversy and now demand regular and proper testing on all ingredients.