Custom Boba Tea Sealing Film is a great way to build your brand and increase customer loyalty.  Sealing films with your logo also give your store a professional appearance and costs less per seal than traditional lids.  We have PP, PET and Paper films available for custom print.

Cup Sealer Machines use a plastic film to seal a variety of different products such as bubble tea, coffee, smoothies, frozen yogurt, etc.  One way to help your brand stand out is with a Custom Sealer Film which has your logo on it.

Customized sealing film with your logo on it helps build customer recognition and loyalty. It is used with a sealing machine and creates the perfect spill-proof, airtight cup.

There are several reasons to choose custom bubble tea sealer film over traditional lids. First, it is more convenient for take-out drinks becuase it remains sealed if tipped over and won’t spill in your bag or car.   Custom sealer film looks more professional and it helps to advertise for your business because it reinforces your company’s logo. When people see your sealer film, they will know where it came from.

Custom Bubble Tea Sealer Film can also save you money. It costs about half the price of traditional lids. A single roll of sealer film will cost about $40 and can seal about 4,000 cups, that’s only $0.01 for every seal!  Traditional lids cost about about twice that much with the average box of 2,000 lids costing about $40.00.

Using sealing film is also better for the environment because it uses less plastic which In turn makes less waste.  Rolls of sealer film will also take less storage space in your store than traditional lids do.   A single roll can seal 3,000-4,000 which would be two large boxes of traditional lids.

Just be sure that your Cups and Custom Bubble Tea Sealer Film are made from the same material to seal properly and you will begin reaping all of the benefits. 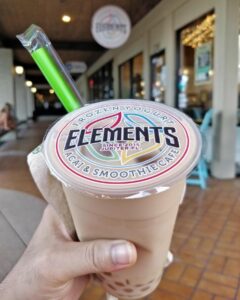 Can I print More Than One Design?

We can print up to 4 designs in a repeating pattern on each roll of your sealing film.  This will be repeated in an A, B, C, D, A, B, C, D pattern on the entire roll of film.

Do you have another container to seal?  We can create a custom lid for almost any container!  We have created plastic films for frozen foods, hot soups, to-go sushi and more!

How Much Does Custom Film Costs?

Custom plastic films actually cost less per roll than clear films!  The reason for this is because we source and print directly from Taiwan to bring the lowest prices to customers around the world.

Each seal of custom film only costs about .01 (including shipping).

How to get started printing custom films?

First, send us your logo, we can print up to 5 colors for free on most sealer films!

Next thing is to decide what type of material to use.   PP cups are the most economical for both cups and custom sealer film.  PP cups will have a lower MOQ (minimum order quantity) and a lower price than PET, PLA or Paper Cups.

Step 1:  Pick What Type of Material You Will Use
Step 2:  Send Us Your Logo
Step 3:  Confirm Your Template
Step 4:  Your Sealing Film will be Printed
Step 5:  We will ship your film to you by DHL Express or Sea Freight

Want to start your own Bubble Tea Business?
Enter Your Info to Receive A Free EBook.

USE COUPON CODE AT CHECKOUT